Volcano boarding in Leon was an activity we were looking forward to for the entire trip in Nicaragua. The chance to hike up an active volcano and then board down it (all for $35) was a once in a lifetime opportunity. It’s the only place to volcano board in the world.

There are just a couple places in Leon that do volcano boarding down Cerro Negro, the name of the volcano. We booked our adventure with Bigfoot Hostel and, since the trip starts at 8:30am, we opted to stay a night at Bigfoot Hostel beforehand. On the morning of the trip, about 20 of us twenty-something backpackers loaded into the back of a truck with our waterbottles and started the journey Cerro Negro. Leon is small and it didn’t take long to leave the city behind and feel the wind blow through our hair as we drove out into the country and close to the Black Hill. 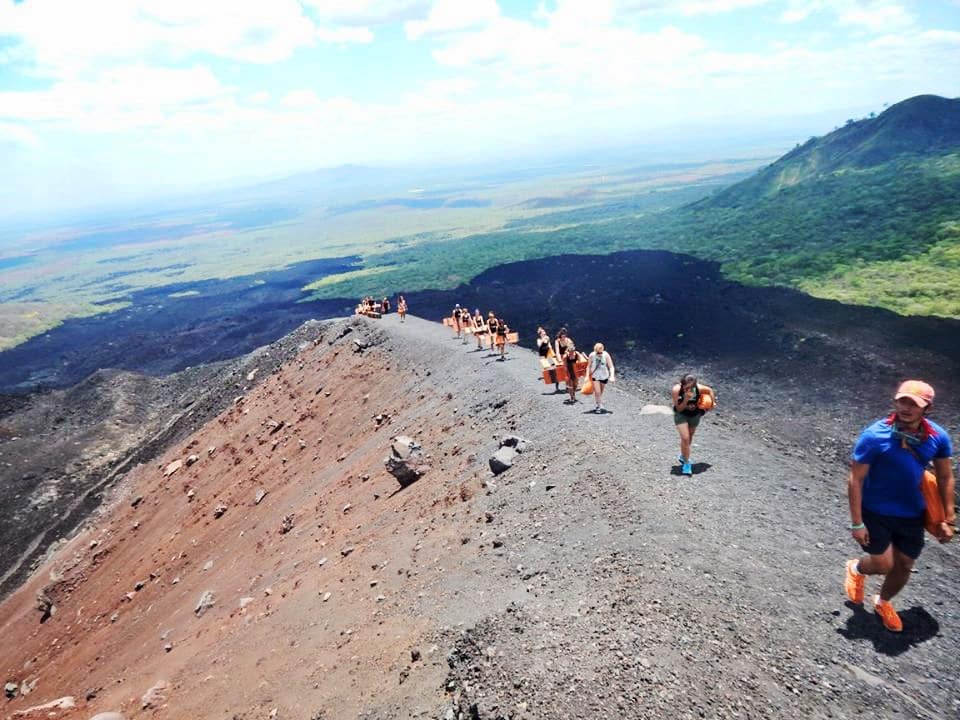 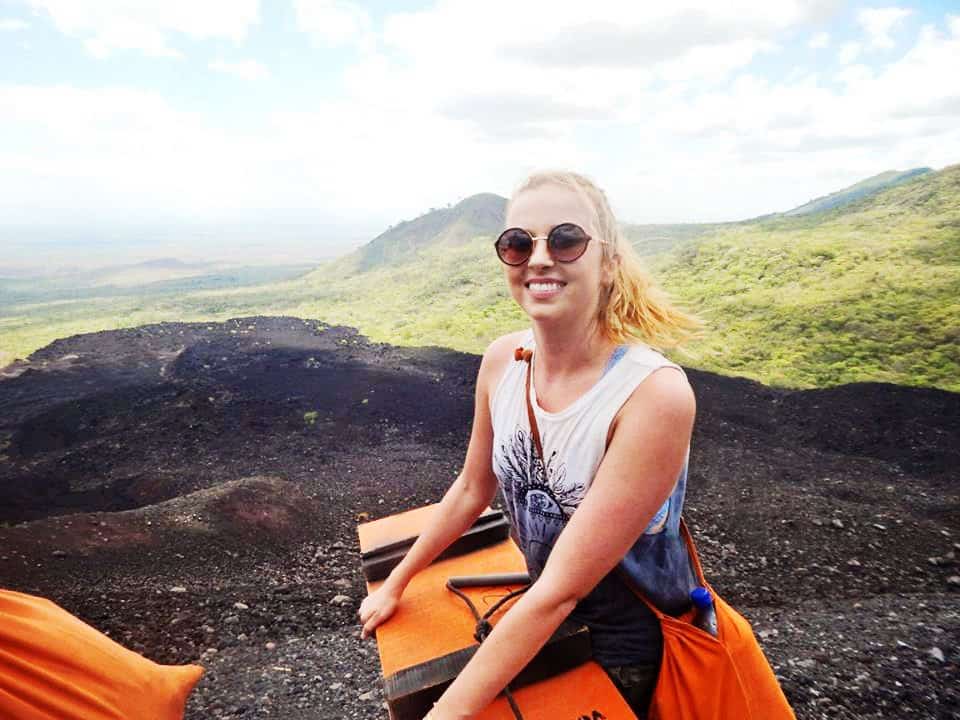 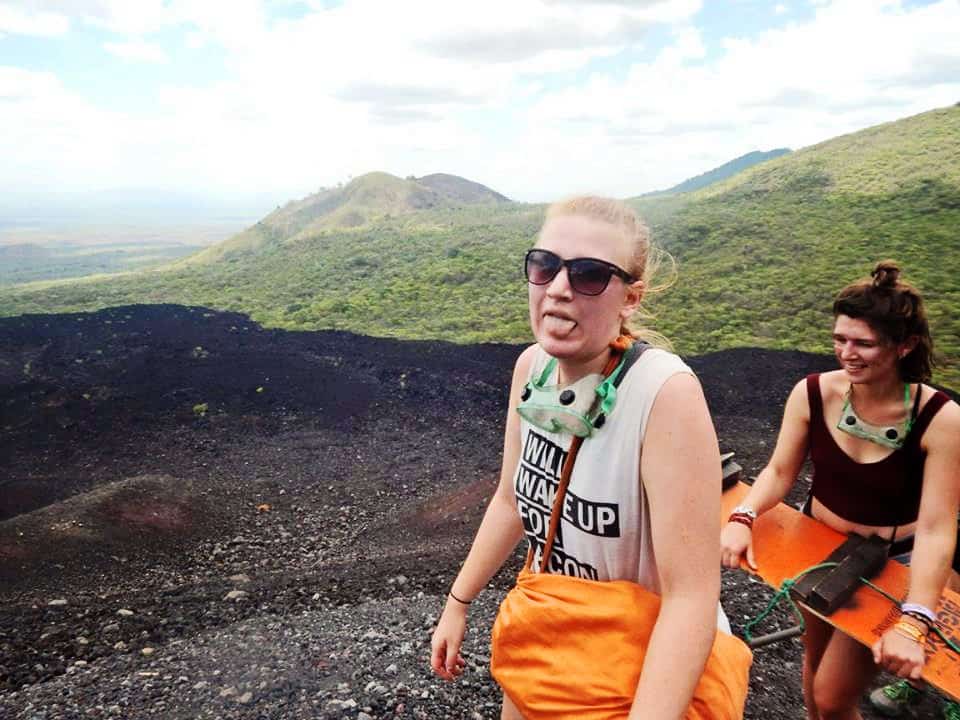 So, here’s the thing. I thought I was in shape. Well, enough shape to easily hike up a mountain without wanting to pass out. But, the combination of spending 2 weeks before this trip glued to my desk, recovering from a nasty travelers bacterial bug, broken sleep from the night before and 95+ degrees, I was NOT prepared for this hike. All my days walking up and down these San Francisco hills have failed me. I found it hard, especially because we were hiking up mostly gravel, but not impossible. Everyone made it up, though I was panting like a dog. That’s me, above, only 1/3 of the way up the mountain. I look great, I know.

Bigfoot provides you with this very attractive orange jumpsuit and goggles. They also provide the board, but you have to carry it up the volcano yourself. Or you can pay a very nice local man a whopping $5 to carry it up the mountain for you. Most of the cheap backpackers in your group will opt to carry it up themselves. Don’t be like them.

I repeat, do not carry the board up the volcano yourself. It’s heavier than you think and it sucks. Pay the nice man $5 to carry it for you and it’ll be the best $5 you’ve ever spent.

Everyone in my group opted to carry their board up and I didn’t want to be THAT GUY who didn’t. But after just 1/3 of the way, my lack of upper body strength failed me. I tripped, cutting my knee open on a rock, and instantly regretted my choice to lug this board around. Thankfully, the nice local man was more than happy to carry my board up the rest of the way (and about 5 other people’s boards, too.). 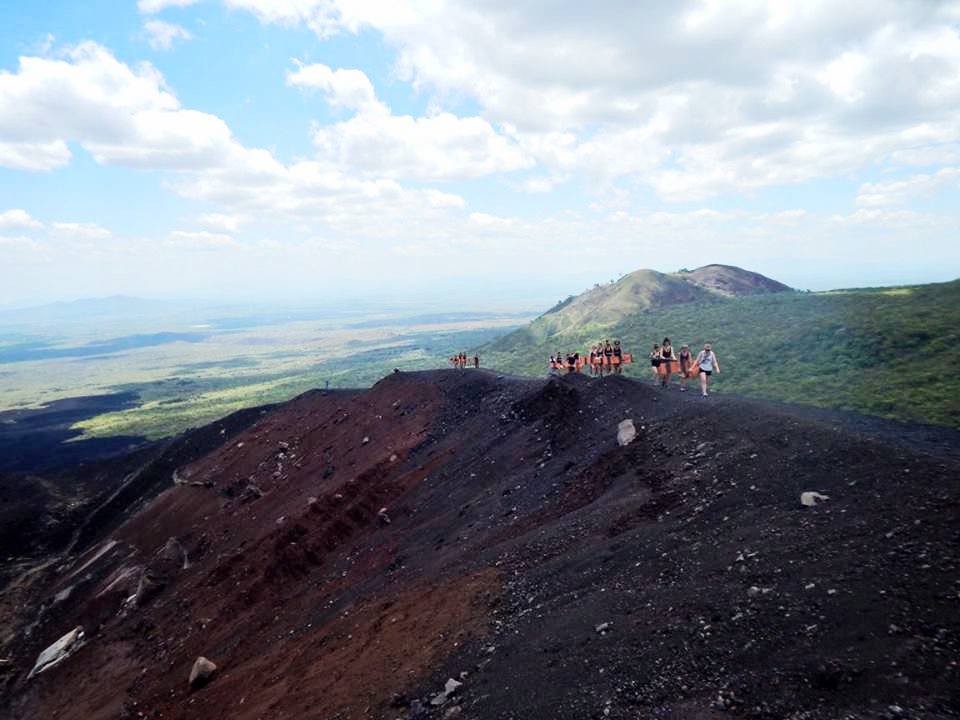 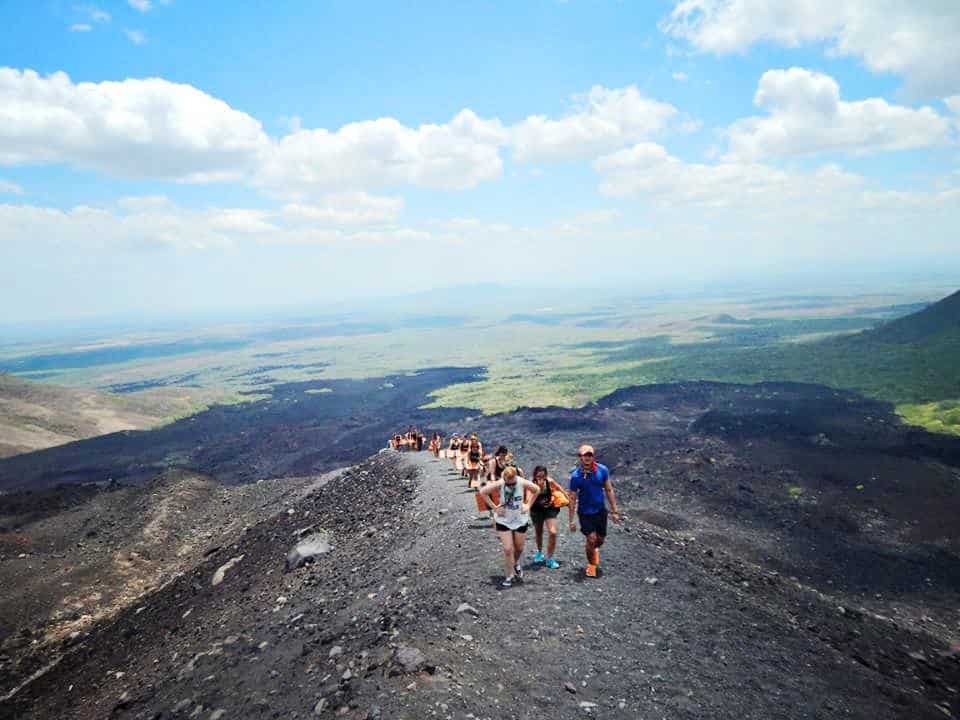 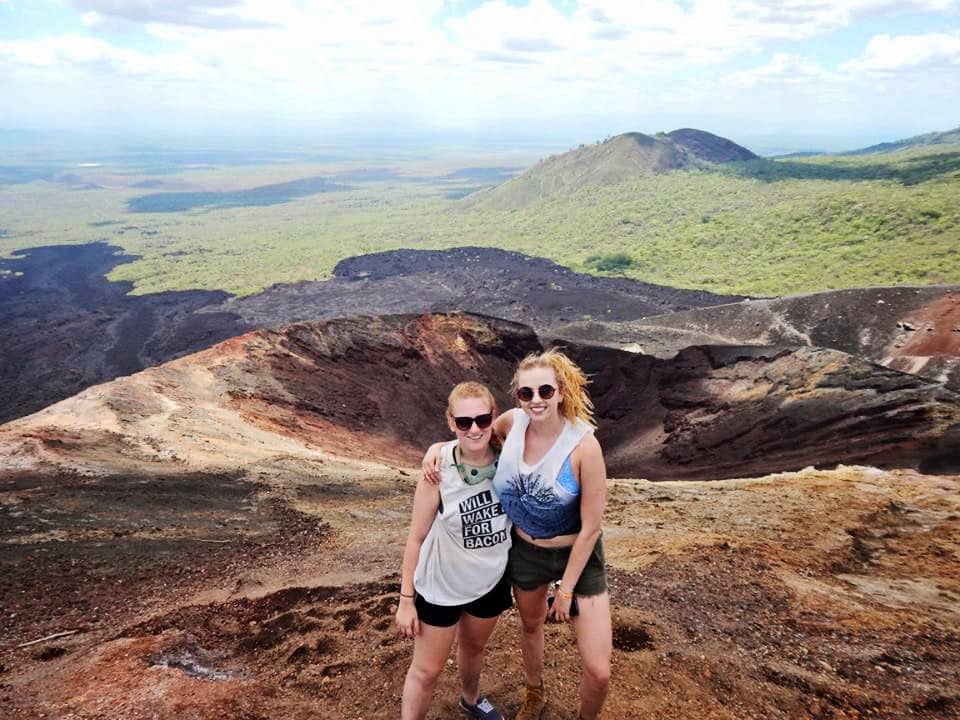 The rest of the hike was MUCH better when you weren’t lugging your board around. We made it to the top of the volcano in about 45 minutes and the view was stunning! Our guide, Ryan, led us to the lookout point above the crater and dug up potatoes he buried there the day before. The heat of the volcano had cooked them perfectly! I didn’t know that a baked potato was something I craved after a long hike, but it hit the spot perfectly.

After our snack, it was time to put on the very sexy jumpsuits and finally board down the mountain! I’m not going to lie, we all had double takes while staring down the side of the volcano. It looks a LOT stepper than you think it should, but because it’s all gravel, your board sinks into the hill. The grade is steep, but you won’t fall off. (I had to remind myself that a few times!) Ryan ran down the hillside to take photos of us racing past, and they had another guy at the bottom of the hill to record our speed. The fastest guy and girl got prizes back at the hostel and the slowest pair had to get water dumped on their heads (which actually seemed like a better prize after such a long, hot hike!) 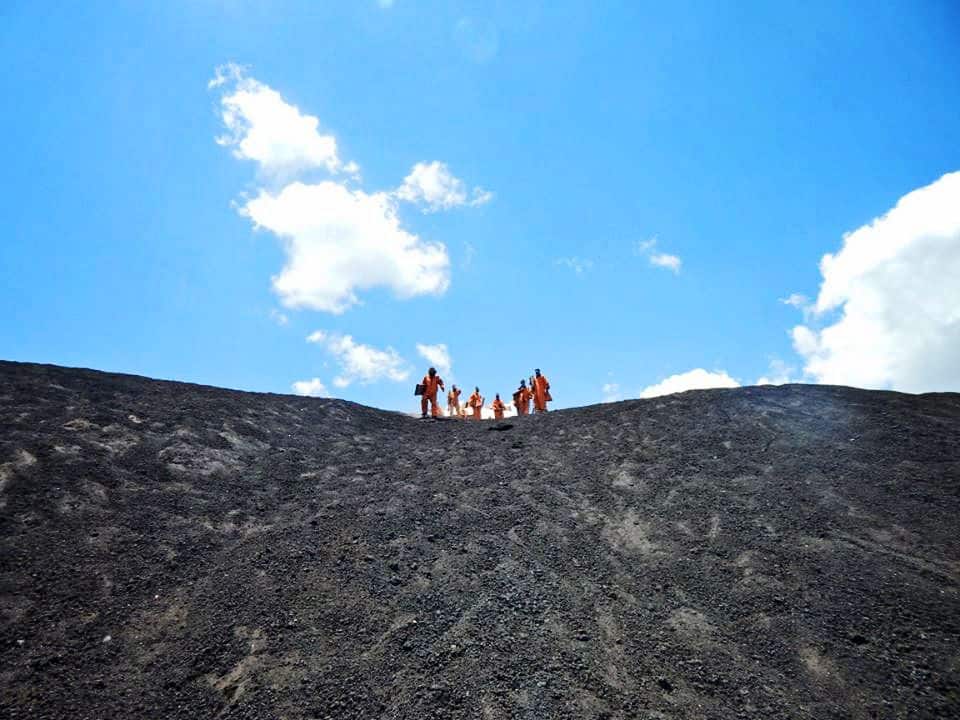 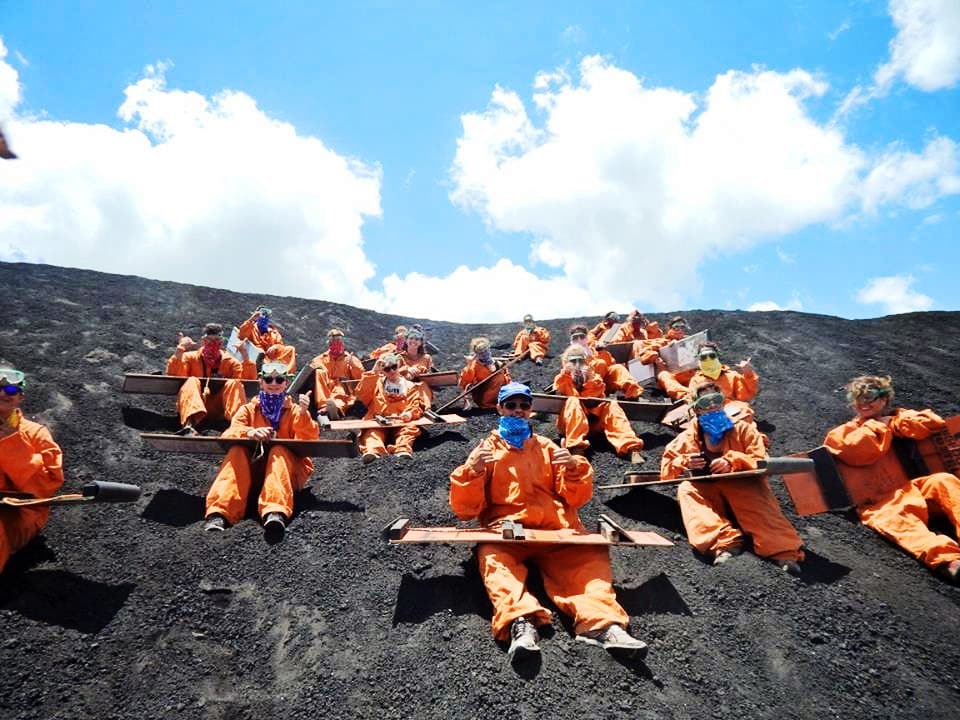 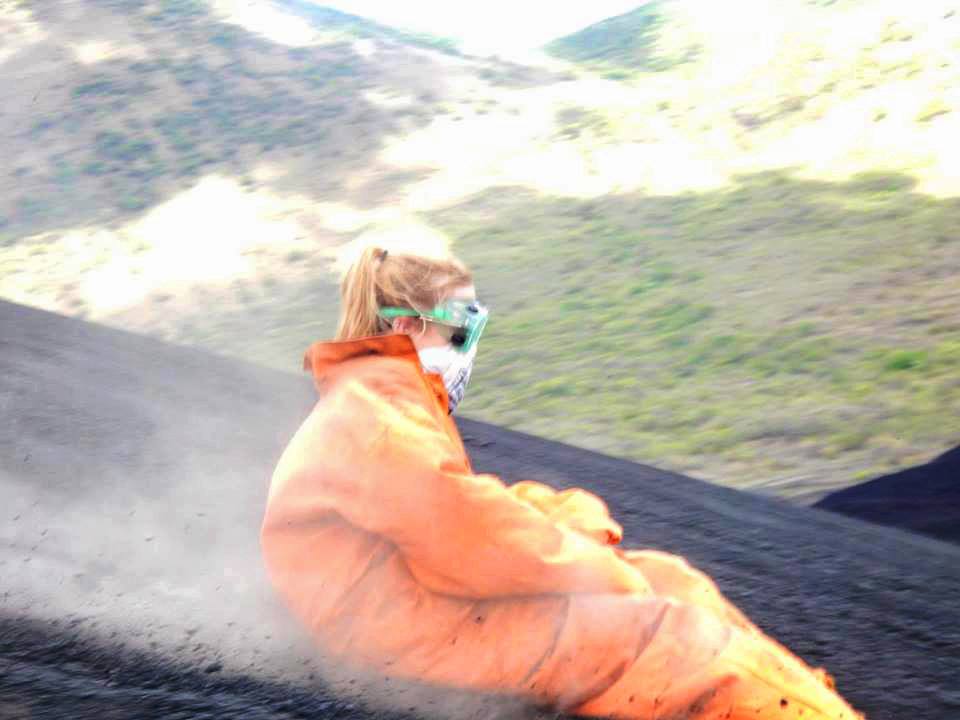 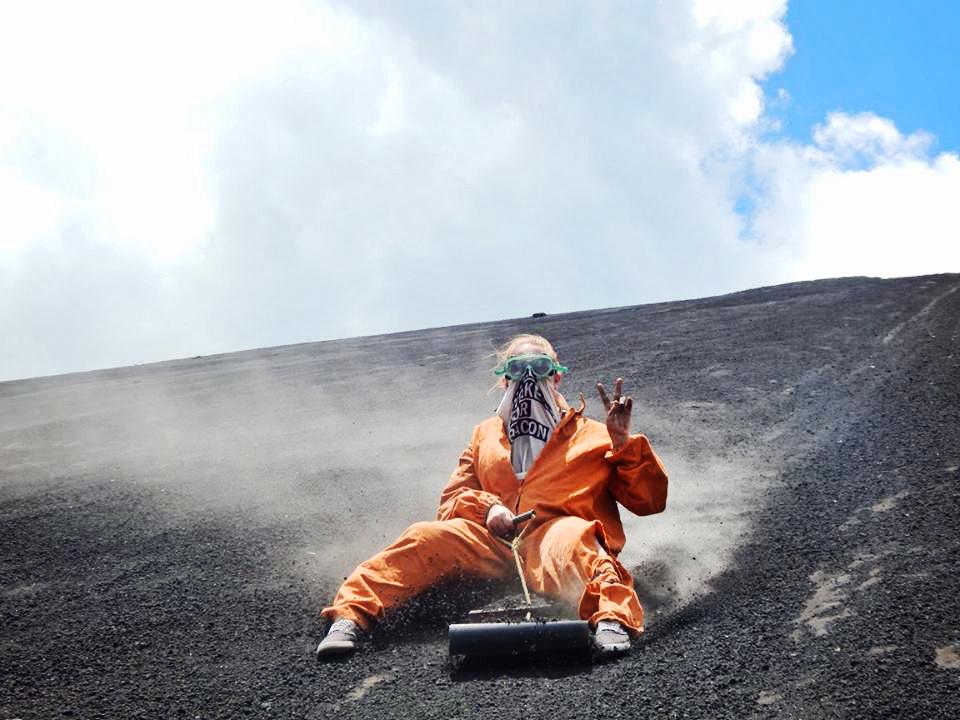 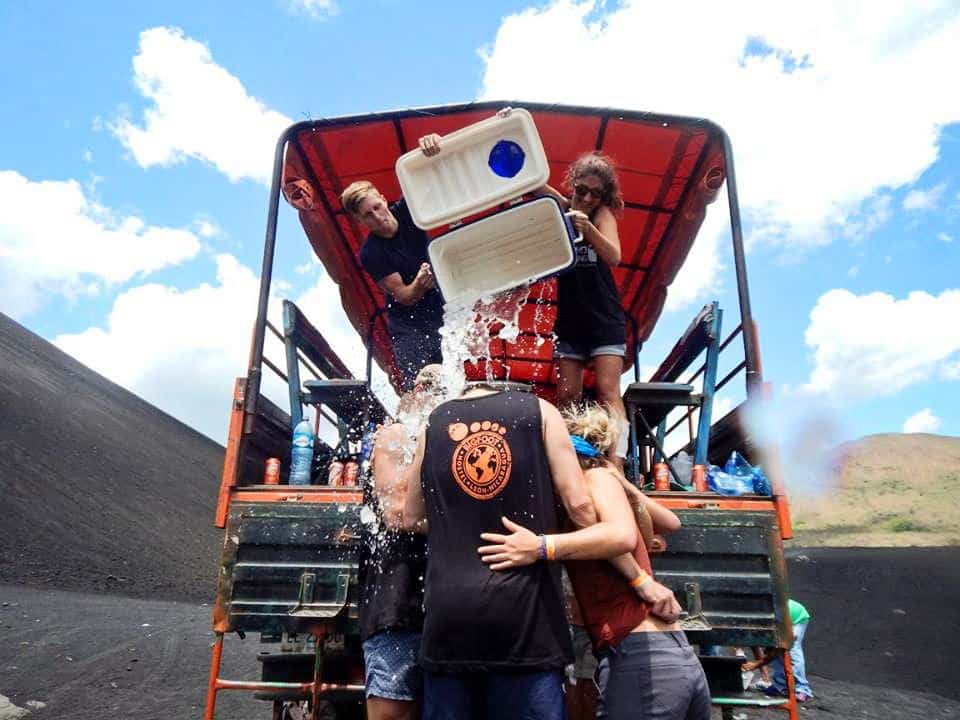 Finally, it was my turn and I inched down the hill. I quickly realized it wasn’t as scary as I thought and sped up. I looked to my right and saw the crazy angle I was on, and farther out to the landscape. So green, blue and peaceful. I chickened out on going ultra fast, but clocked in at 35 km (about 22 miles per hour). Melanie clocked 30. The slowest people did 17 and the fasted was 85 km, I think! Those two came racing down the hill so fast that they fumbled and got scraped up. Luckily Bigfoot hostel brings along a first aide kit.

I got such a rush from volcano boarding. It was so much fun! If you are planning on visiting Leon, Nicaragua, it’s well worth your day to do this! After everyone had their turn, Ryan handed out cold beers. Again, not something I though I’d want after a huge hike and being slightly dehydrated, but it hit the spot perfectly. On the way home, Ryan played trivia with us and I won a juice AND a cookie. Winner Winner.

Again, if you’re into adventures and are in Nicaragua, go volcano boarding! We had a great time with Bigfoot Hostel. It was cheap, well organized and we all made it down safely. You should bring a very sturdy pair of shoes, or a pair that you don’t mind tossing after (really – my sneakers didn’t survive the trip!) Also, bring a bandana, waterbottle, sunglasses and sunscreen. It cost $5 to get into the park, so bring that as well! Your guide will take photos the whole way, so leave your camera and phone behind if you don’t want to risk breaking them.

If you go volcano boarding, leave a comment below! I want to hear how you like it.