We parked our campervan at the hidden camping site and immediately headed into the forest towards the river. After a few minutes of walking (and avoiding low hanging branches) we emerged onto a secret portion of the Smith River to find a jungle gym of rocks and small natural pools beside the rushing river.

On that hot day, all we could think of doing was jumping in for an evening of wine and swimming at the Smith River National Recreation area!

My husband and I rented a campervan and took it on a 9-day road trip through Northern California and Oregon. We found ourselves driving lazily on Hwy 1 and found a hidden spot to wild camp (park for free overnight) right on the Smith River just outside the Jedediah Smith Redwoods National Forest / State Park. Normally it’s foggy and chilly along the coast in the summer, but that day, it was in the 80’s.

We grabbed a couple of bottles of German wine from the back of our van, put our swimsuits on and jumped into these naturally forming pools to cool off! Mind you, the water was FREEZING, so I only jumped into the water once. The rocks were hot, though, so we poured ourselves some wine and spread out next to the river to watch the sunset behind the mountains.

What We Drank – Wines of Germany

The Smith River is outside Crescent City and technically part of the Six Rivers National Forest recreation areas. Lucky for us, because anything operated by the United States Forest Service is fair game to wild camp for free! (You can’t overnight park or camp in state parks or National Parks, but USFS land and BLM land is open to the public!) 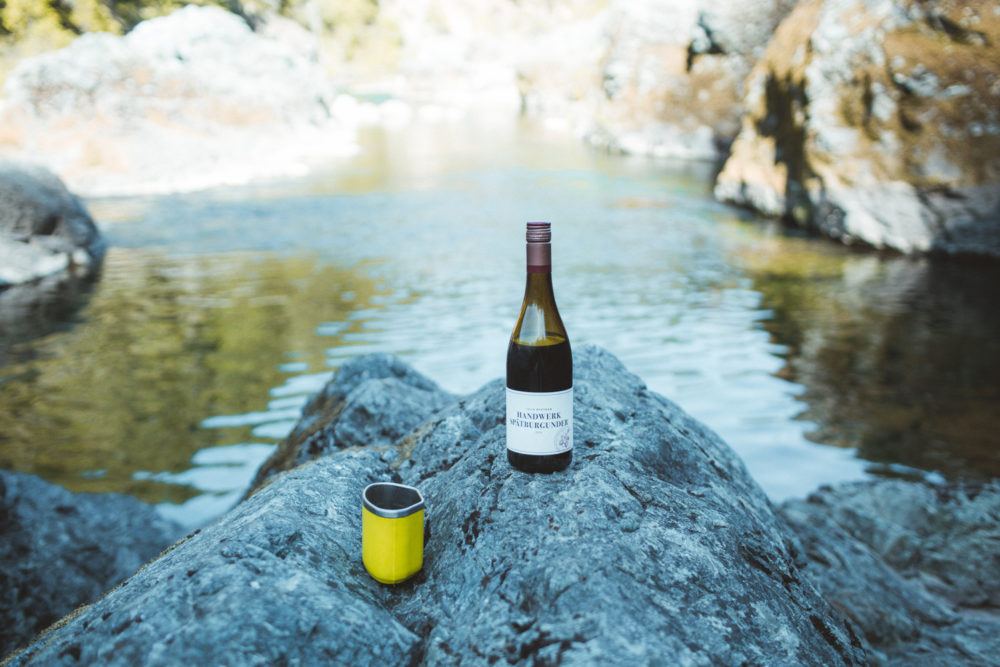 Instead of paying for a formal Smith River National Recreation area camping site, we found this secret (and in my opinion, better) campground called “Off the 199” on the iOverlander. That’s how we camped for most of our road trip. We spent days exploring trails, creeks, lakes, hot springs, scenic rivers and small seaside towns along Hwy 1. We hiked in a few different Redwood National Parks and visited beaches and a lighthouse.

Each night around happy hour, we would pull open one of our camping apps & find a nice spot to spend the night. Park the van & pour a glass of German wine while cooking dinner!

On this particular evening, we had a late dinner so we could enjoy happy hour with our Wines of Germany along the river. These magical naturally forming pools aren’t available all year round, only when the river levels are high enough. There are tons of other Smith River access points if you can’t find this secret one, don’t worry! As we drove in, we saw tons of people swimming along with various points of the Smith River. Some even brought inflatable tubs. It looked like a party!

Funny story about this evening. The night before we were on a turnout directly on Hwy 1 and parked near a blue campervan occupied by a couple. We spent the night on either side of the turnout and didn’t talk to each other. They pulled out early in the morning and I didn’t think anything of them again until we reached the entrance to our hidden Smith River Recreation Area campground! Right in front of us was that blue van, they arrived about 1 minute before we did!

This time we introduced each other. They were a friendly Canadian couple doing a road trip along the West Coast. We seemed to both have very similar tastes in adventures and camping spots. And THEN, the next evening, we happened to camp right next to a couple from Munich, Germany! If only we had a bottle left over of our German wine to share with them, but we drank it all up. Funny how the universe works, right?

>> Heading to the Smith River National Recreation Area? Locals told us Myrtle Creek Trail and the Little Bald Hills Trail are fun to hike (it was too hot during our visit to do any hiking.) Also, North Fork is a popular spot for Smith River rafting if that’s your thing! I much prefer to sip tasty German rieslings next to a river, but hey, that’s just me!

Next time you are reaching for a bottle of wine – for a camping trip along the Smith River California or not – reach for a bottle of German wine. Germany doesn’t just make good beer, they also have 13 fantastic wine regions! Outside of California wines, we always have a few German bottles on our wine shelf at home.

We even take them on our trips so we always have a good drink in the evenings after a great day exploring!

Got any questions about wine, wild camping or the Smith River area? Leave a comment below or DM me on Instagram @thewhimsysoul and check out GermanWineUSA.com.