I suddenly found myself online shopping for mustard yellow dress shirts and ties at 11pm.

My friends and I had booked cheap tickets to Los Angeles and we were racking our brains for something new to do in the city (perks of living in San Franciso – LA is like a backyard playground!) And then, after listening to an episode of The Office Ladies podcast, it suddenly hit me:

What if we go to LA to find all The Office filming spots? I texted my friend Gen if she wants to and she replied: “Absolutely I do.”

Keep reading to learn where The Office was filmed, exact addresses of The Office filming locations and photos to help guide you to these spots in real life! 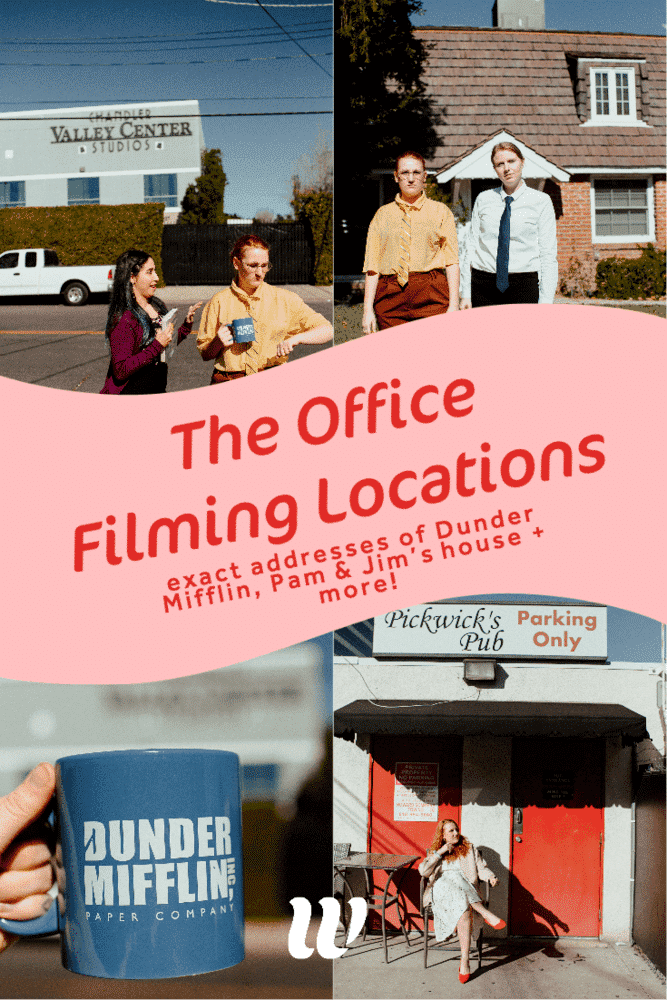 >> Got a question about The Office locations feautred here that you need answered quickly? DM me on Instagram @thewhimsysoul and I’ll be happy to help!

Where was The Office Filmed in Real Life?

According to Jenna Ficher and Angela Kinsley (aka Pam and Angela) on their podcast, the first season was actually filmed in a real office building. Isn’t it wild that they used an actual office? Imagine a whole crew and actors crammed in there.

But, after the second season, the rest of the series was moved to a sound stage that some team replicated exactly to look like the original.

And of course, the outdoor locations & shots from The Office were filmed in “The Valley” in Los Angeles, primarily located around Van Nuys and Studio City. (Minus the beach day location and Schrute Farms, the latter which was filmed at Golden Oak Ranch which is an 800+ filming lot owned by Disney. Tons of movies like The Parent Trap and Princess Diaries II were filmed here, too!)

Asking yourself where was The Office filmed in Scranton? Other than the opening credits, it was all filmed in Los Angeles. Though I’m told the real-life Steamtown Mall in Scranton, PA does pay homage to the show. 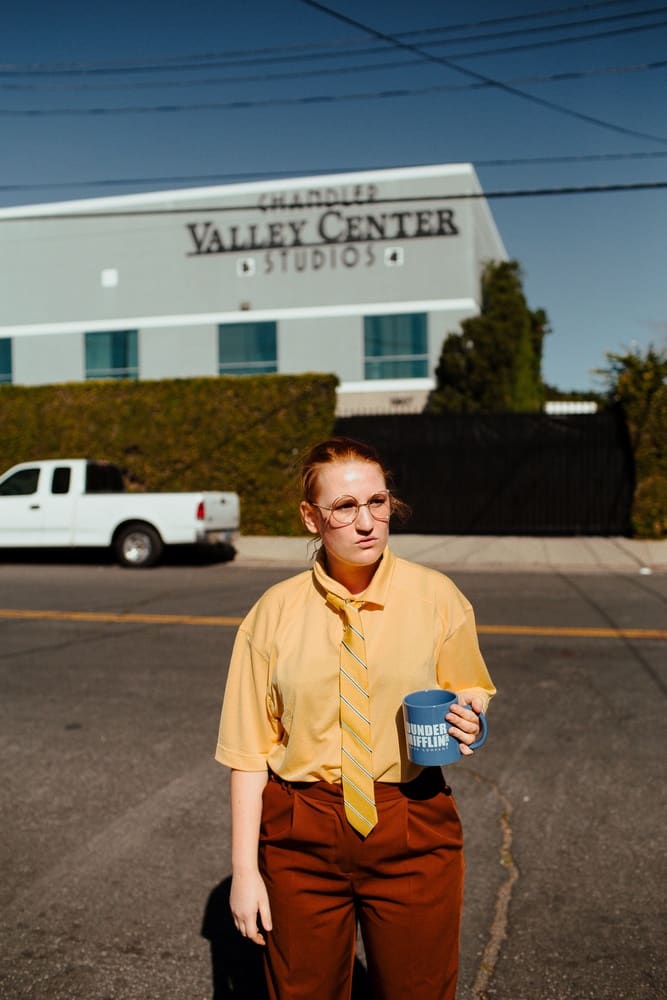 Oh, and as you can see from photos, we took our fangirling to a whole other level by dressing up as characters. (Or, stealing the identity of our favorite characters, which isn’t a joke JIM, but we sure had fun.)

I absolutely adore Dwight (and yellow just happens to be my favorite color) so I called dibs on his sexy mustard ensemble. Gen was Three Hole Punch Jim and Bri did a perfect Kelly. 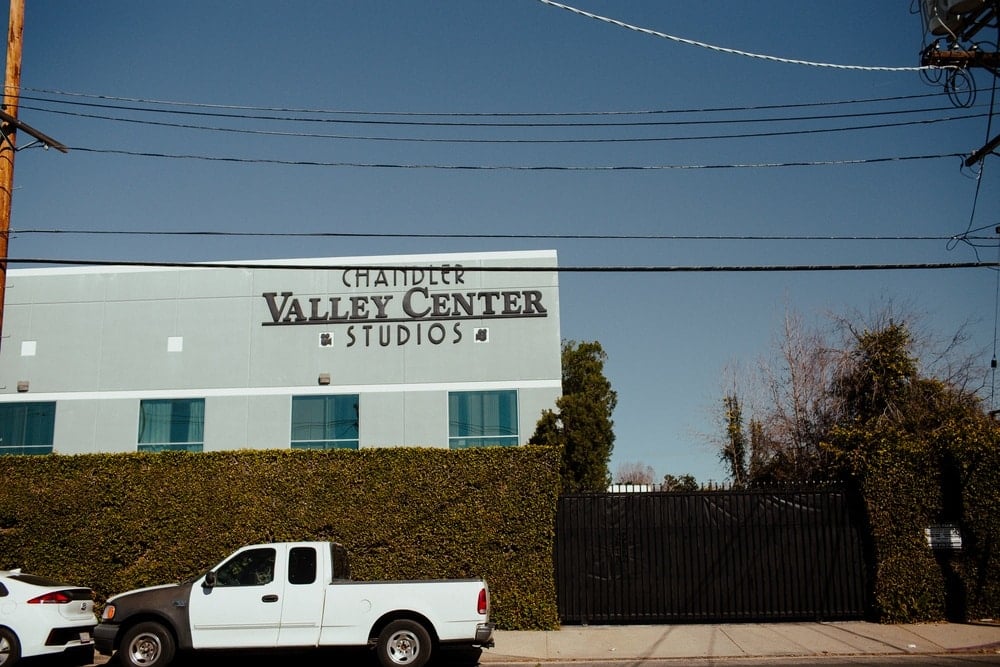 The Office Filming Locations: Addresses + Photos Of All The Scranton Icons

Heads up – some of the addresses shared by other blogs or found via a simple Google Maps search are incorrect. The addresses I’m sharing with you here for the spots we visited are verified and correct!

And, before we begin, shout out to The Office Ladies Podcast for a lot of this behind the scenes information + fun facts I’m going to share with you throughout this post. 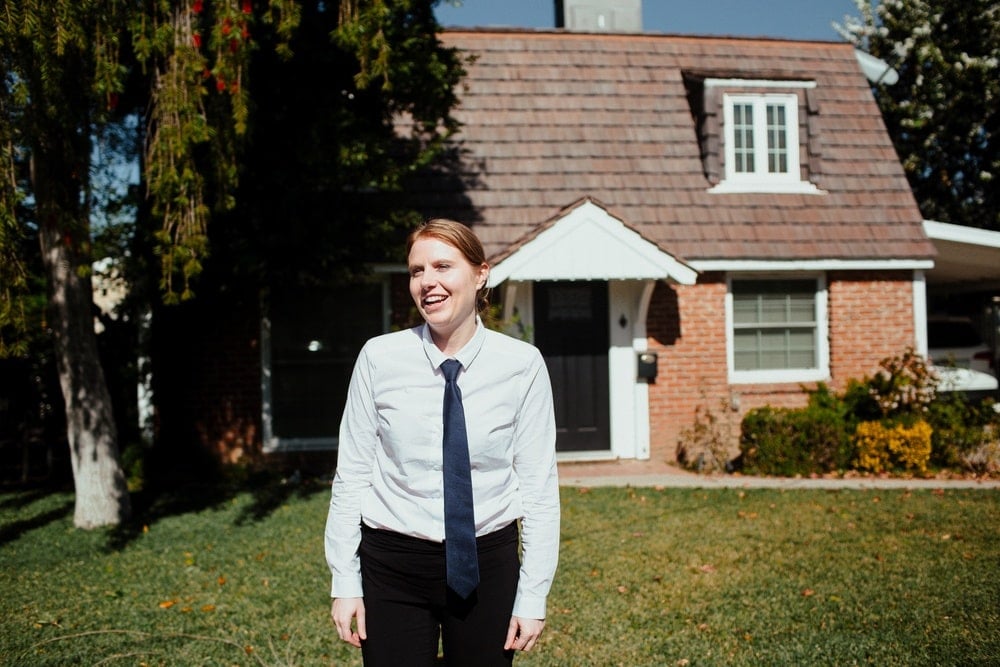 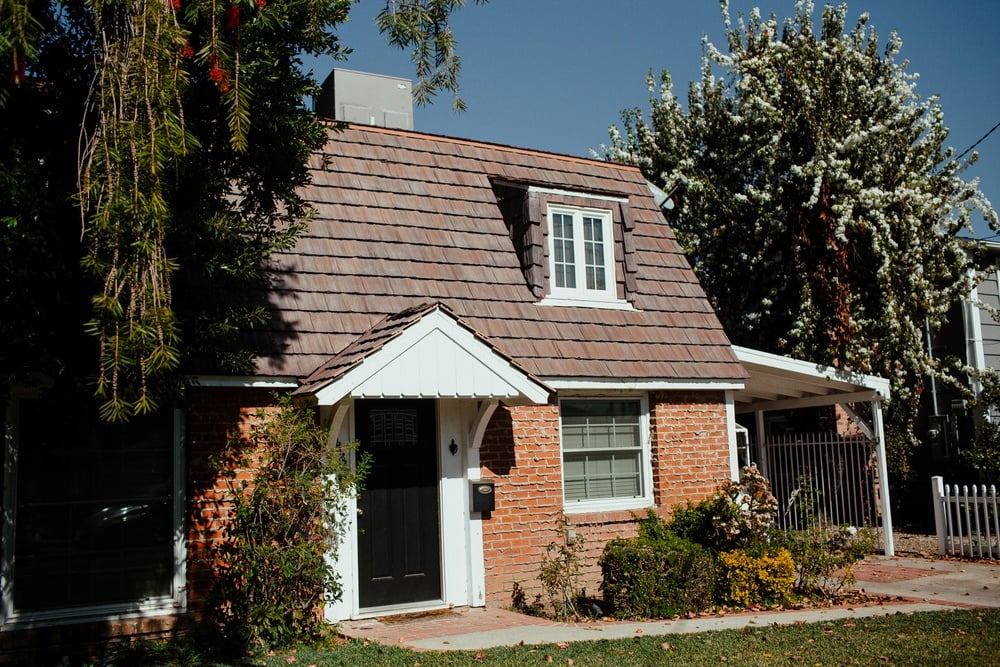 Personally, if my husband bought me a house with a permanent creepy clown painting without asking me, I wouldn’t be too thrilled. But this classic set location is easy to find, has tons of street parking, and makes a great first stop.

Jim & Pam’s house looks a bit different now – there’s way fewer trees, no white fence and the front is fixed up. I also saw a woman walk in wearing a very cute dress I recognized from Target so I like to imagine the folks who live there now are woke millennials who are also The Office fans. 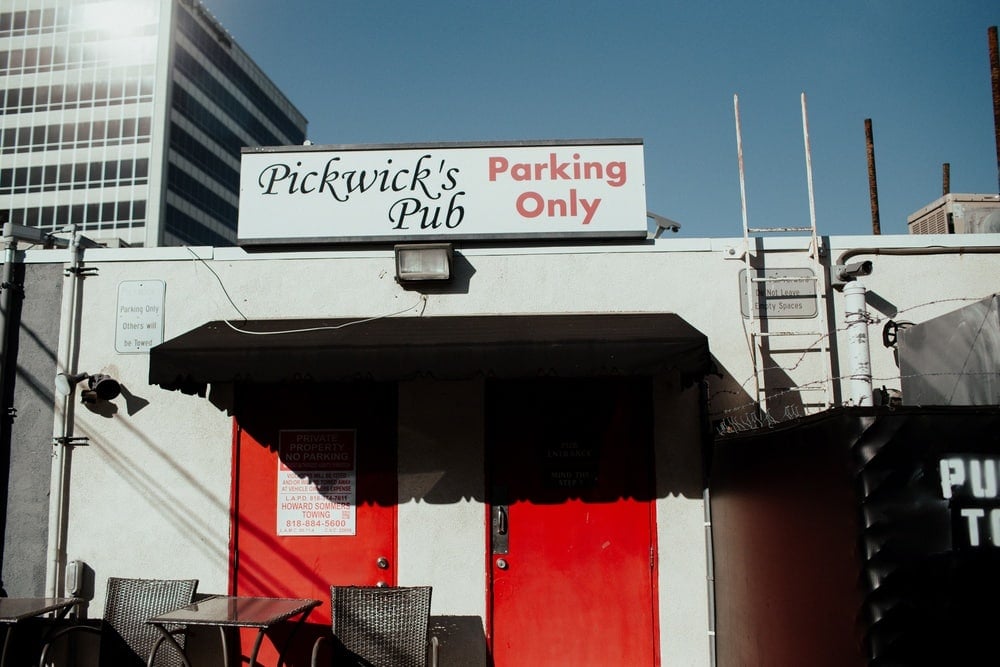 Poor Richards – aka Pickwick’s Pub in real life – is a divey little Packers bar (much to my delight, as I originally hail from Wisconsin.) I was a little nervous that the staff would be annoyed that yet ANOTHER group of The Office fans showed up just to buy a beer and take photos, but the bartender was incredibly nice.

There’s not a lot left from The Office days. In the back is where you can find the two doors leading into the pub, though they are now painted red. On the inside, there’s just one mirror with “Poor Richards Pub” embossed on it.

We hit this spot towards the end of our film location hunt so we treated ourselves to a house red ale (really good, try it!) and some fried pickles.

Phyllis and Bob Vance, Vance Refrigeration, got married at the First Christin Church of North Hollywood. There’s a parking lot next to it that says it’s for church parking only, but we parked there for 5 quick minutes to snap photos.

I was a former wedding photographer, this scene always tickles me. I can’t tell you the number of times I have used this exact trick to get people out of frames (it’s usually a mom or an aunt who beckons over some random family member into a shot, but after a few snaps they need to GTFO because this is a photo for the bride’s immediate family only or something like that.) 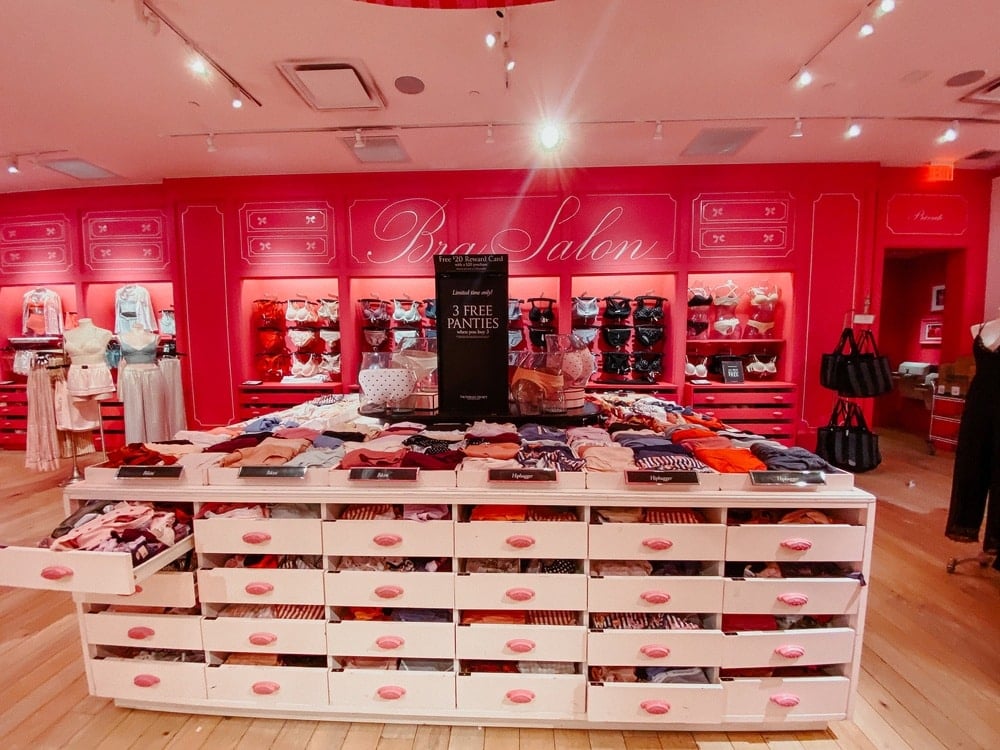 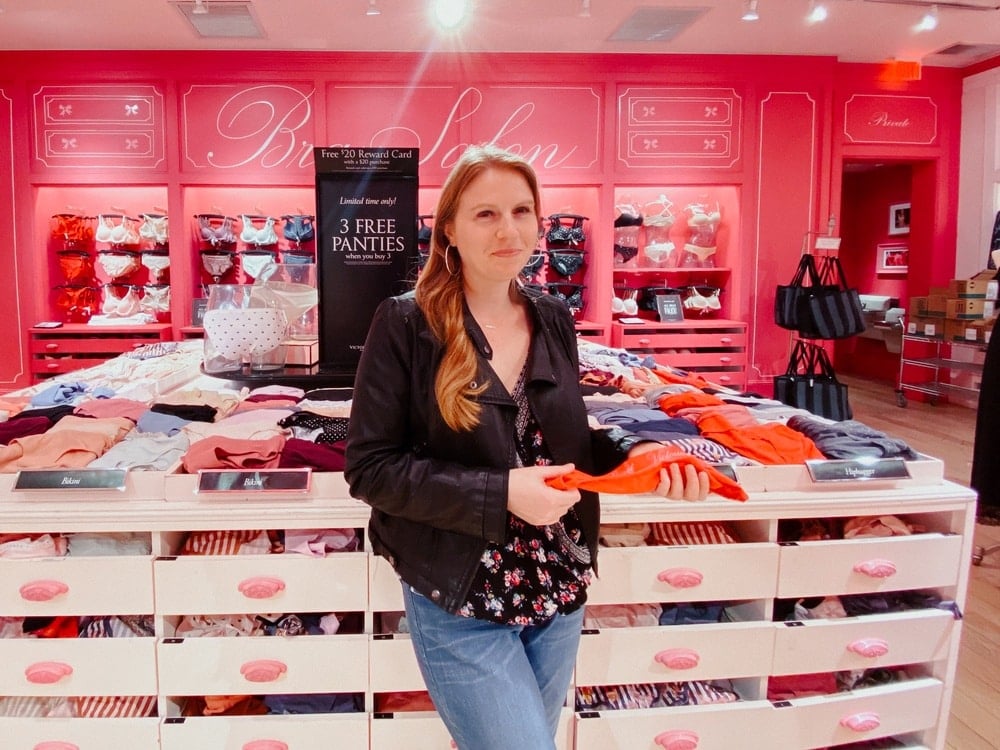 The Steamtown Mall actually a Westfield Fashion Square Mall, but if you’re mega fans like yours truly, you can still find the places they filmed inside.

But there’s more spots inside, like the fountain that Micheal tries to climb into. We weren’t going to stop here at first because, honestly, it’s just a mall but we needed a coffee break and Starbucks just happened to be next to that fountain.

And it was pretty fun trying to recreate Pam’s photo from inside Victoria’s Secret. 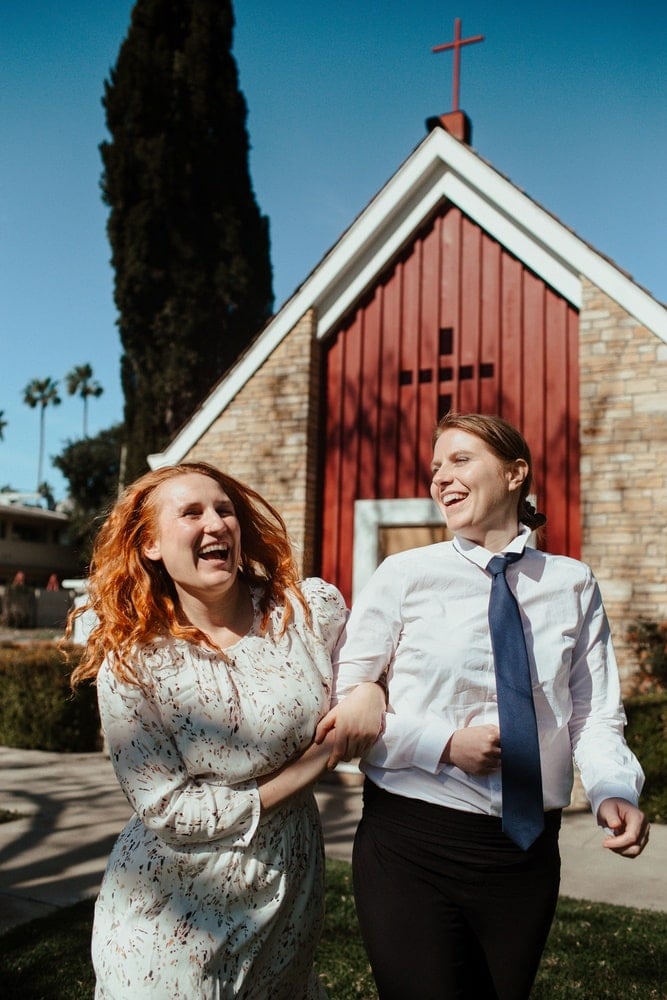 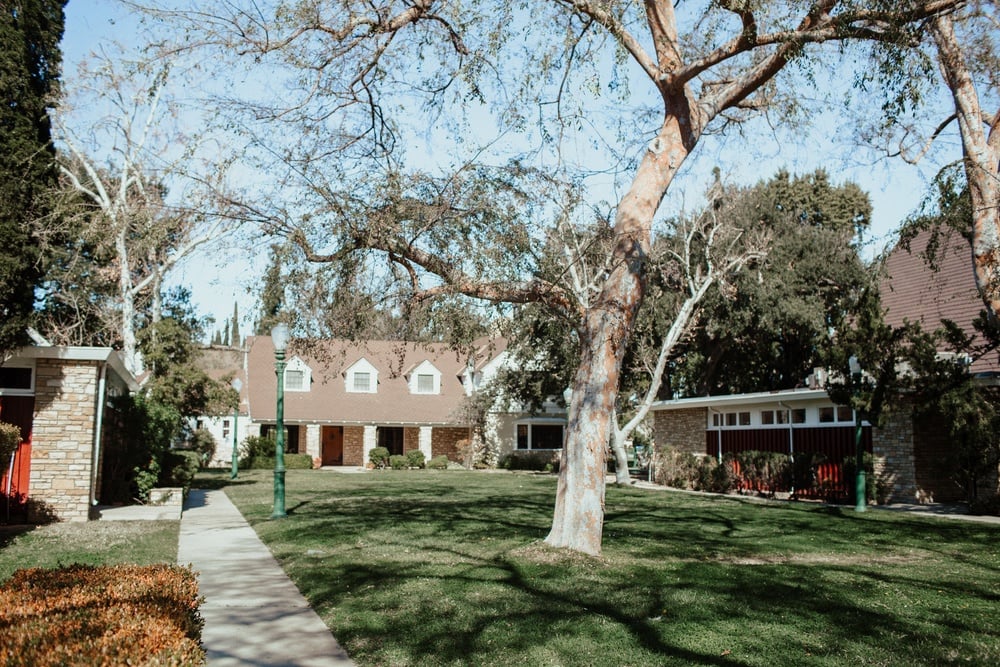 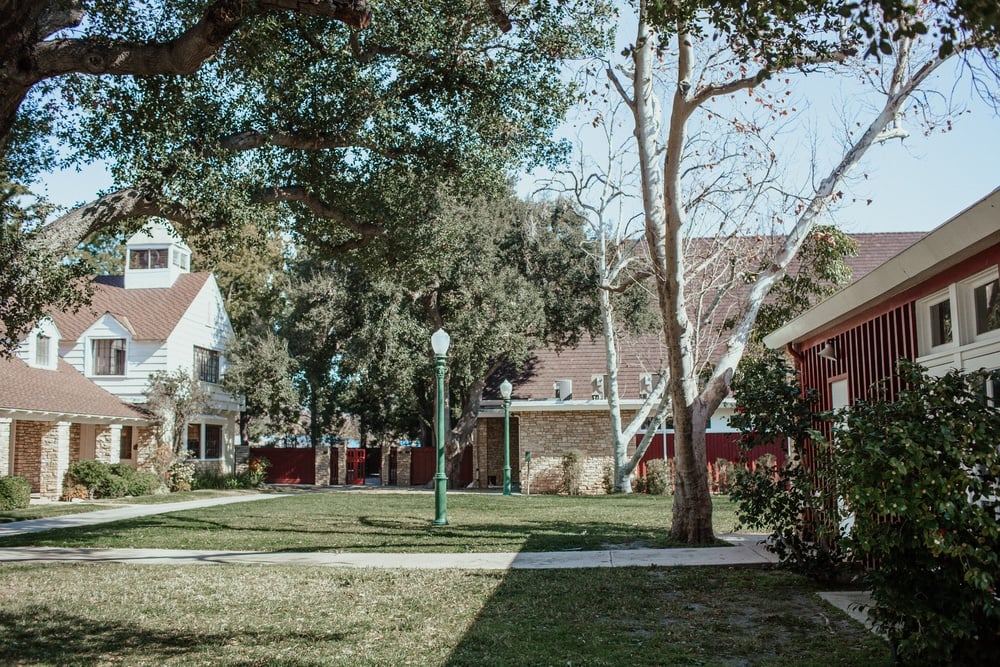 This was where I changed out of my yellow Dwight costume and into a white dress I had packed along. I had happened to style my hair curly that day and we decided I looked enough like a “Pam in a wedding dress” to snap some photos with Three-Hole Punch Jim in front of their church.

This church is really large and sprawling. It was hard to find a single iconic area to shoot in without doing too much trespassing, but when you are there in person you can totally see areas inside the gates that Jim did some scenes in. 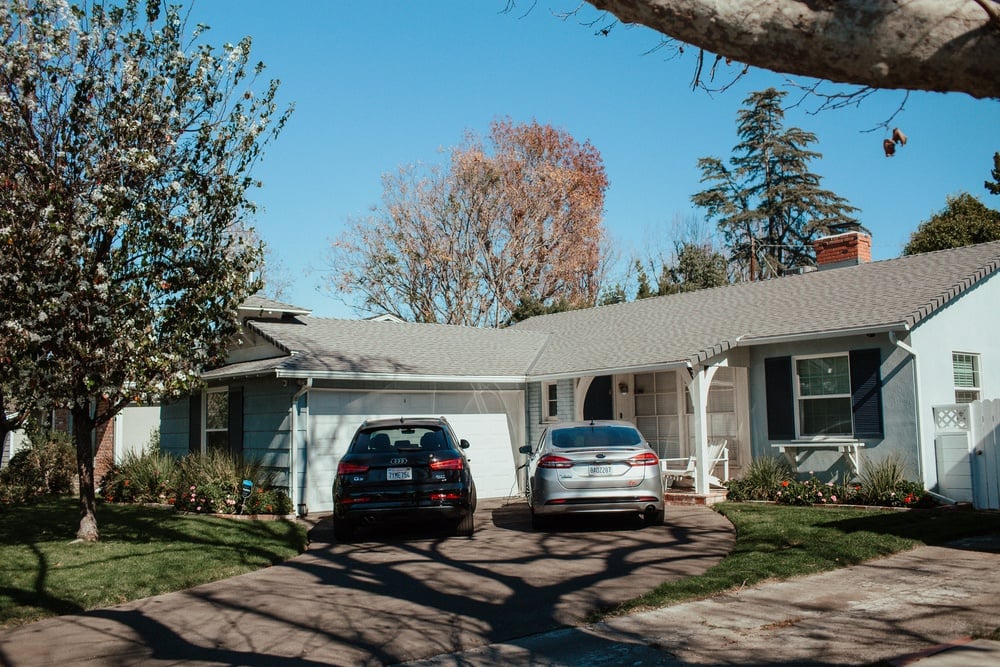 I’ve always wondered what Angela thought of Oscar’s house when she came to live with him. Probably thought the blue was whoreish or something (HA!)

What you don’t see on the show is the beautiful tree that was starting to blossom in front of the house. The owners were home (hence the car in the driveaway) so we didn’t stay too long to gawk. 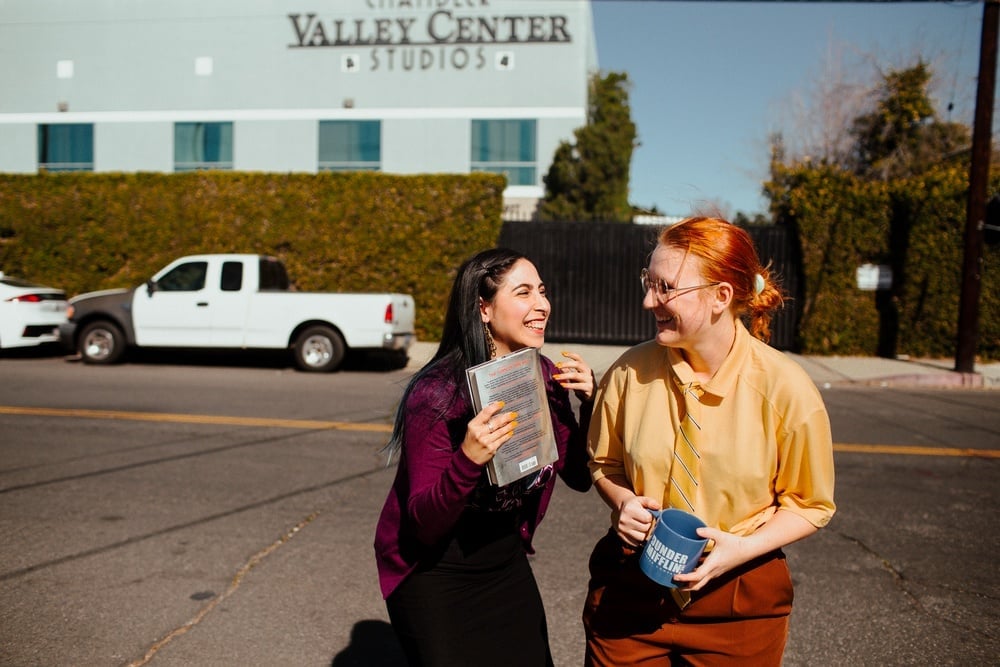 And now, for the hero: The Dunder Mifflin Office! Sadly,  the Scranton Business park is no longer, this building is now the Chandler Valley Center Studios.

As you can see from the photos, it looks exactly the same from in the show, but with a different name slapped on the front. Hedges and all!

As a heads up, the office park is guarded and fenced off. (I mean, it’s fair. They get The Office fans showing up every single day.) Gen tried to go around back to see if she could find the loading docks where scenes were filmed (like that one where Miheal buys “weed” to frame Toby) but encountered a guard.

But, it was funny imagining Steve Carell on top of the Chandler studios building doing something stupid and picturing how if The Office really was here, that episode where the parking lot is closed totally makes sense. There is like, NO easy street parking on that road!

Other The Office Filming Locations

We ran out of time (and also getting tired, we did wake up at 3am and flew to LA that same after all!) These are the other locations from The Office that we didn’t get a chance to visit but you totally can if you’re a champ!

*Since we did not visit these in person, I can’t guarantee the addresses are 100% correct but these are where I believe each spot is located.

*RIP Chili’s: Wondering what Chili’s was The Office filmed at? According to The Office Ladies podcast, it was a temporary Chili’s that was torn down after filming was over. So you can’t visit the exact one… but like, its’ a chain guys so you can relive your Dundies moments all over the country. 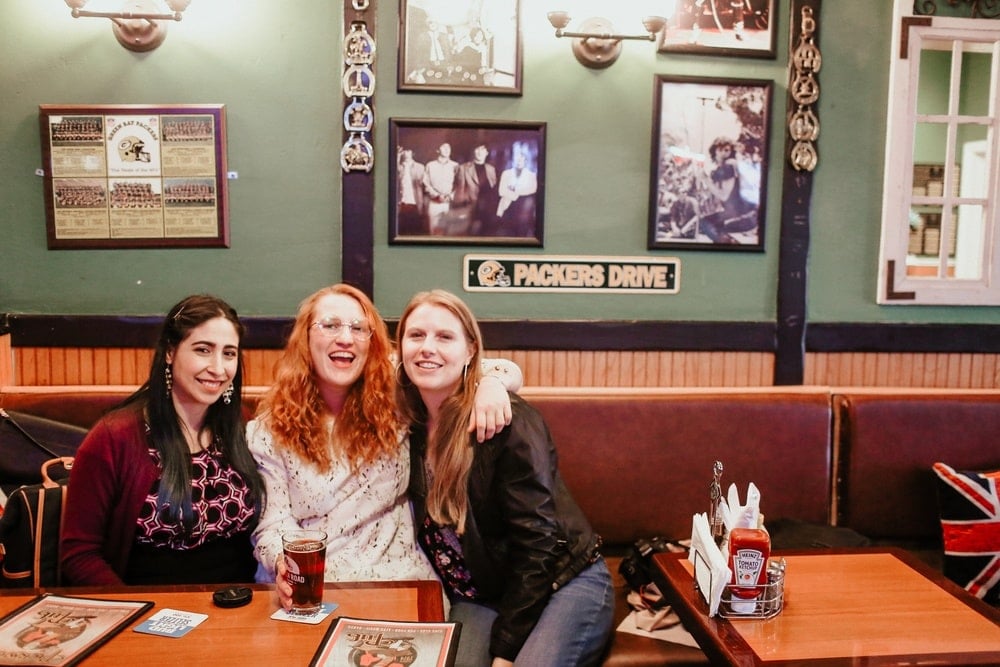 So that’s it, folks! I literally started squealing when we turned the corner and saw The Office building. I couldn’t wait to share all these addresses and the film locations with you. Since, rewatching the show is even more fun now, because I know what those spots look like In Real Life.