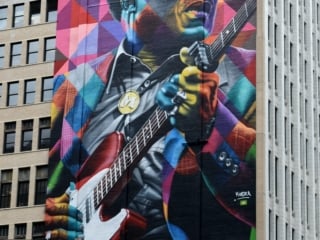 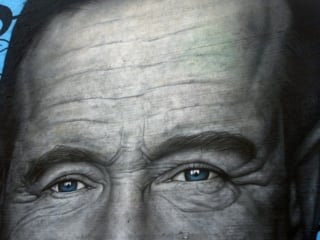 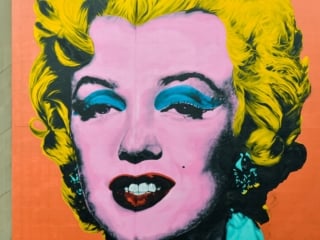 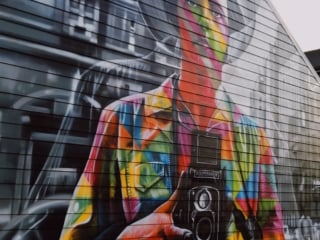 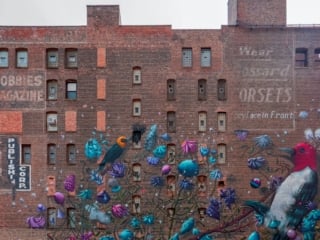 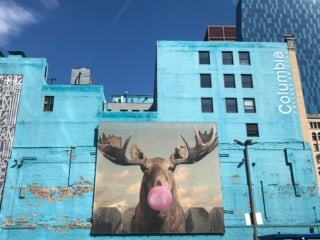 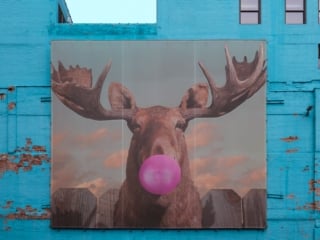 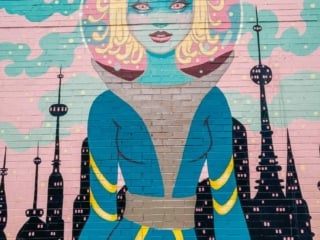 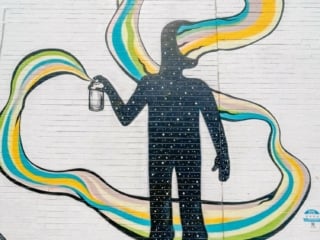 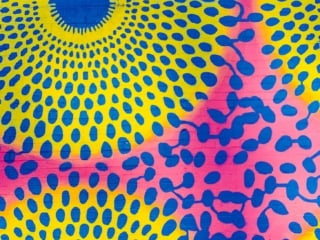 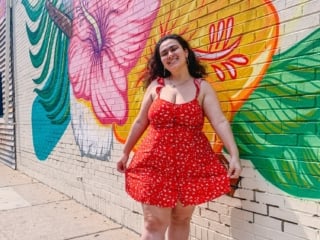 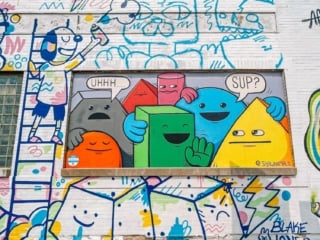 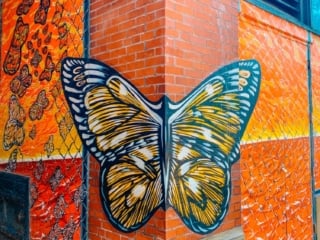 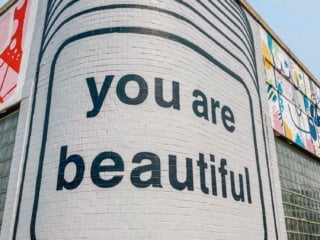 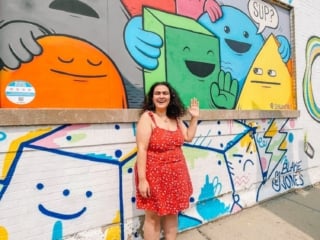 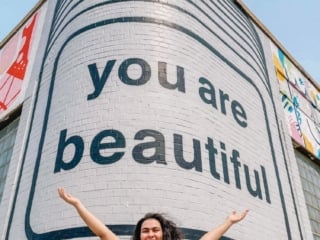 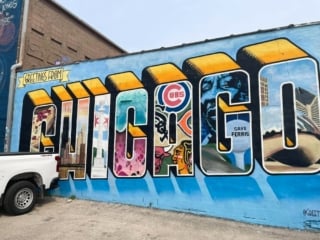 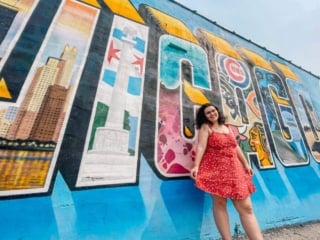 Chicago has always been a city I’ve dreamed of going to since I was a kid. After being confined to my house for about a year and a half and being completely vaccinated, I decided to finally book a ticket and spend a weekend in Chicago.

I would always look up things to do in the city if I were to ever visit. Cloud Gate (The Bean) and the Willis/Sears Tower—there’s a huge debate about which one the tower should be called, fair warning—are almost always every guide’s go-to recommended locations for first-time visitors.

However, something that gets downplayed a lot or completely ignored in these “must see” travel guides is the street art in Chicago. 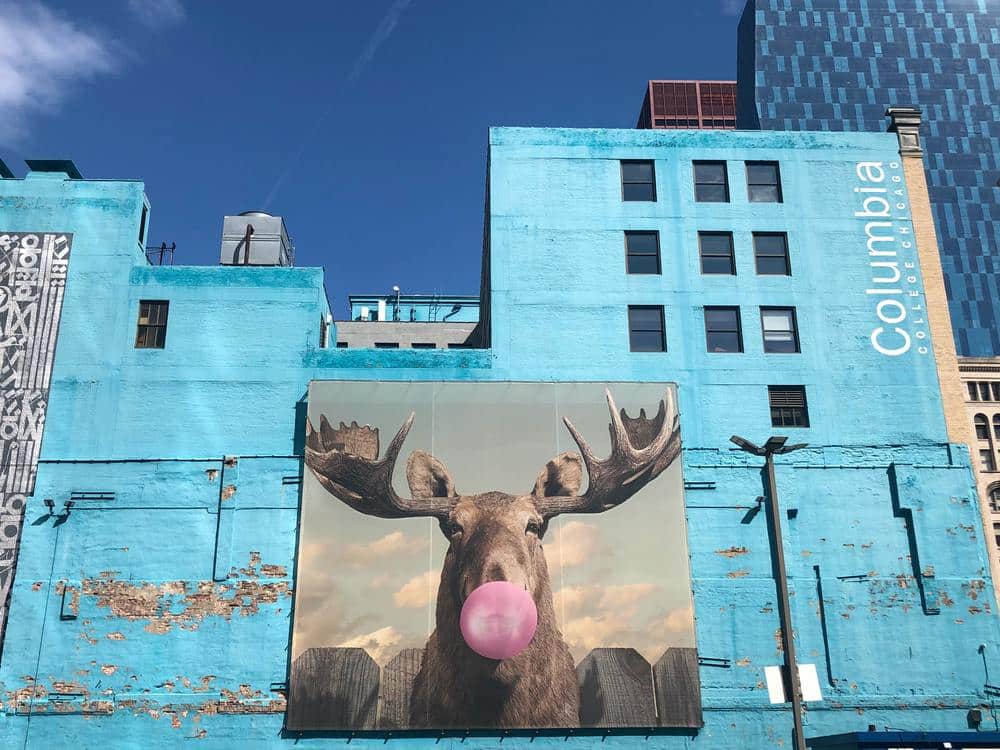 Chicago has some talented artists such as Hebru Brantley, known for his work that addresses nostalgia, mental psyche, power and hope, or Max Sansing, a fine artist who made the Michael Jordan mural that sits beside Walter Payton.

Regardless of what neighborhood you’re exploring and walking through, it seems as if there is a mural around every corner. Along with photos and addresses to some of the best murals in Chicago, I provide some helpful tips and mistakes I made that will help you on your quest to discover Chicago’s art scene.

This colorful installation is found on the side of Columbia College and has a place for two different photo ops when you visit. The first one can be done in front of the burst of multiple monarch butterflies that look as if they are flying off to the right.

The second chance of getting a photo op with this mural is standing on the corner in front of the bigger butterfly to make it look as if you have wings. It’s within walking distance of the Museum Campus so after taking in some of this public art, you can go to the Shedd Aquarium or Field Museum.

This might be a bold statement but some of the best murals in Chicago are found on walls next to many other art. Shawn Smith, the artist of this piece, is known for this style of geometrical characters that seem as if they have a life of their own. Standing in front of them as if you are a part of the installation is a fun way of including yourself. It’s a part of the Chicago mural project, indicated by the sticker to the left of the painting, where you can find more information about Chicago mural artists and their work.

This is possibly the most iconic Chicago mural you can visit when in the city. The size and scale of this work is possibly one of the biggest you’ll encounter so you’ll have to take the photo from a distance. Fun fact: New York City artists, Victor Ving and Lisa Beggs, have made at least 30 “Greetings From” murals in the country but Chicago was their first official one.

A tip I have for anyone going to this mural is to be prepared for a car to be blocking part of the mural. It’s located on the side of a wall directly facing a parking lot so while you have plans to go take a picture to show your friends and family you’re in Chicago, others have plans to go to work. Be prepared to work around any hiccups such as these—it’s possible!

This display of Chicago street art is one of the few that I suggest taking a photo of from across the street. There will be cars driving by so my tip is to get there fairly early in the morning (at least before the lunch rush) so you have a better chance of getting a photo of the whole installation. If you do happen to get there mid-afternoon, not all is lost—it’s all about the angles. While you might not get a photo of the whole mural, you’ll still be able to take a picture in front of some colorful flowers.

The Wabash Arts Corridor is home to a variety of different murals located in the South Loop neighborhood. This project started in 2013 by Columbia College Chicago where they promote “the use of public space as a ‘living urban canvas’.” You can knock a lot of photos out in one go here! 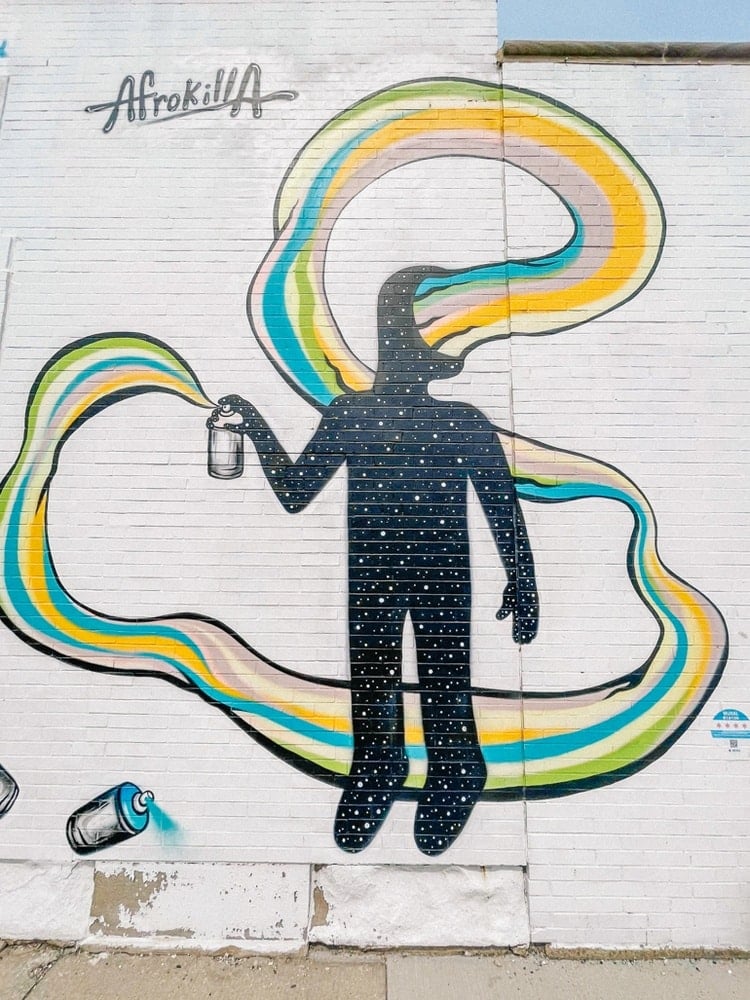 There’s a Chicago Mural Project now in place that highlights Chicago street artists and their work. However in 2018 the city went through an extreme removal of 256 graffiti pieces. Before this “cleanup” Blek le Rat, a French street artist known for his stencil art, was asked to put his work on the side of the Cards Against Humanity HQ (where this mural is located).

His stencil work was removed during the clean up as was Due to this removal, a few companies came together and decided to dedicate this wall to Chicago street artist’s voices and imagery. This current mural made by Afrokilla was the first artist of many to be added to this wall.

This mural gives off a major (updated) Zenon: Girl of the 21st Century vibe. At the time of my visit, there was a section of the street that was closed off so it was easy for me to take pictures of the whole mural without having to do too much work. 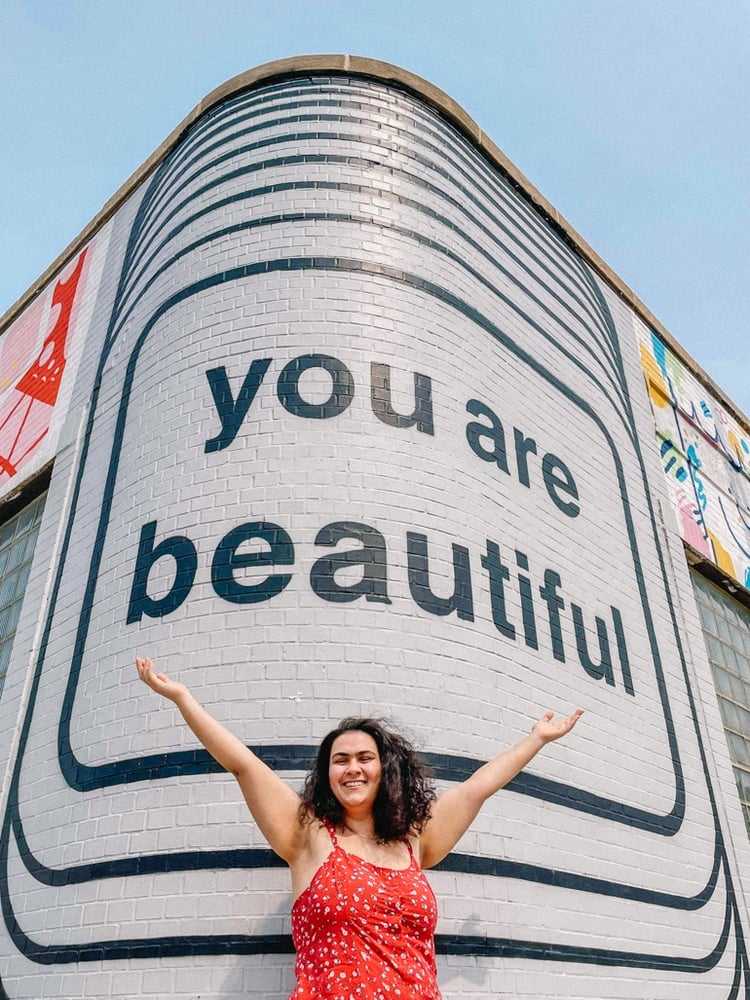 Learning to love yourself is difficult and daily affirmations are hard to keep up with if you’re new to it. Take a photo with this mural and save it as your wallpaper to constantly remind you that; you are beautiful! 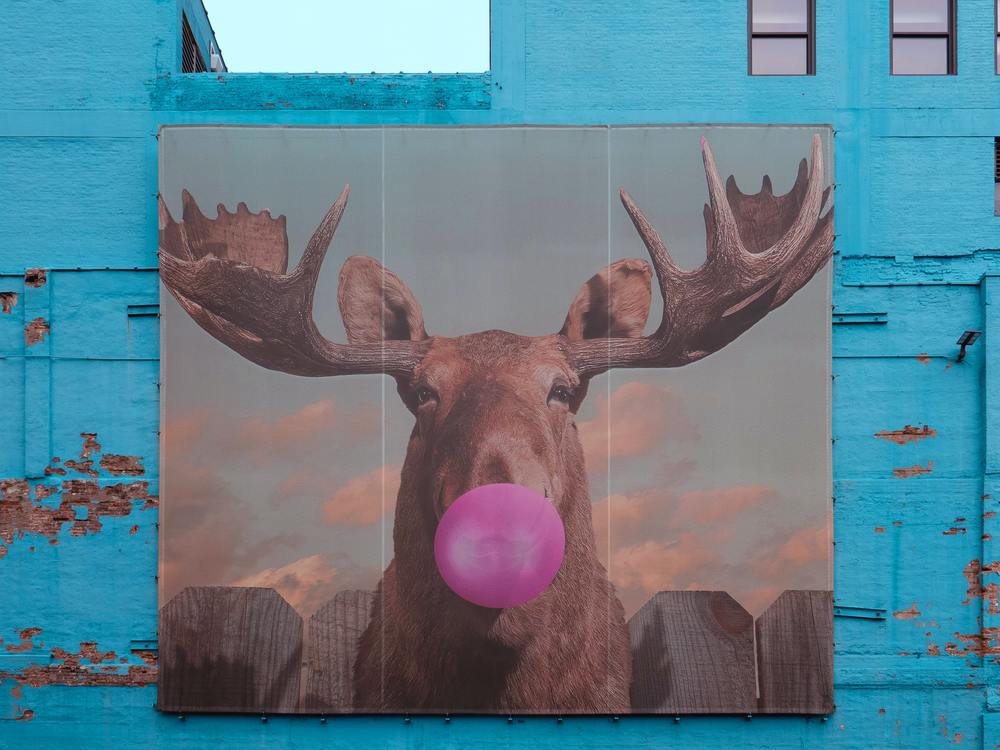 This project was one of the winners in a 2014 competition between students and alumni at Columbia College Chicago. It’s located in a parking lot and it’s fairly difficult to miss. If you take the CTA Green or Orange Line, you’ll get a view of this mural from a higher point.

Dutch artist, Collin Van Der Sluijs, used a variety of mediums such as spray paint and acrylics to achieve this enormous image. It highlights two endangered birds in the Chicago area; the yellow-headed blackbird and the red-headed woodpecker. The birds are surrounded by native flowers found in the city.

Chicago photographer Vivian Maier is painted in color while the rest is in black and white, much like her photos. This mural made by artist Eduardo Kobra is a tribute for the street photographer whose work didn’t get recognized or even discovered until after her death. This mural is found in Chicago’s Wicker Park neighborhood. 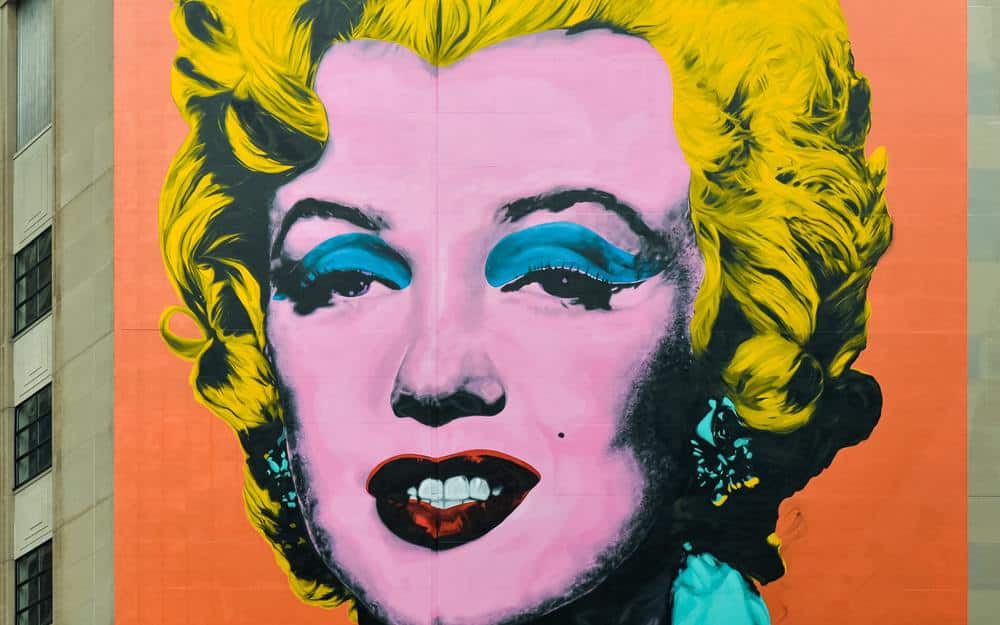 While the songbird wall and the greetings to Chicago wall are big in size, they’re no match for this Marilyn Monroe painting. It’s inspired by Andy Warhol and it’s 5,000 square feet (bigger than an NBA court). Zimmerman is a street artist that has multiple murals in Pilsen Chicago and uses his artwork to discuss socio-political issues.

You can find this mural dedicated to Chicago-born actor Robin Williams on the side of the Concord Music Hall. It’s vibrant colors can be seen even from the CTA Blue Line train (heading south). If you head in a straight line down Milwaukee Ave, you’ll stumble upon a few places to shop and eat as well as an I heart Chicago mural.

This mural of Chicago blues musician Muddy Waters was created in 2016 for the Chicago Blues Festival. This celebration in Millenium Park takes place every year in June. Kobra, who also made the Vivian Maier mural, is known for his portraits of famous people that are bright and colorful.

This list is only a mere fraction of what murals are hiding in the streets of Chicago. If you do happen to be in the Old Orchard Shopping Center or visiting Chicago Cultural Center, there are a few murals outside of these buildings to take pictures of and with.

I didn’t have time on my trip to swing by, but I do know there are also good murals on Blue Island Avenue and Wicker Park Street as well! If you visit those, drop a comment below with how you liked them.

The City of Chicago has a mural registry where you can see Chicago mural maps and find many other artwork. From personal experience though, some of the best murals are the ones tucked away in alleys, on the side of a building or in parking lots. 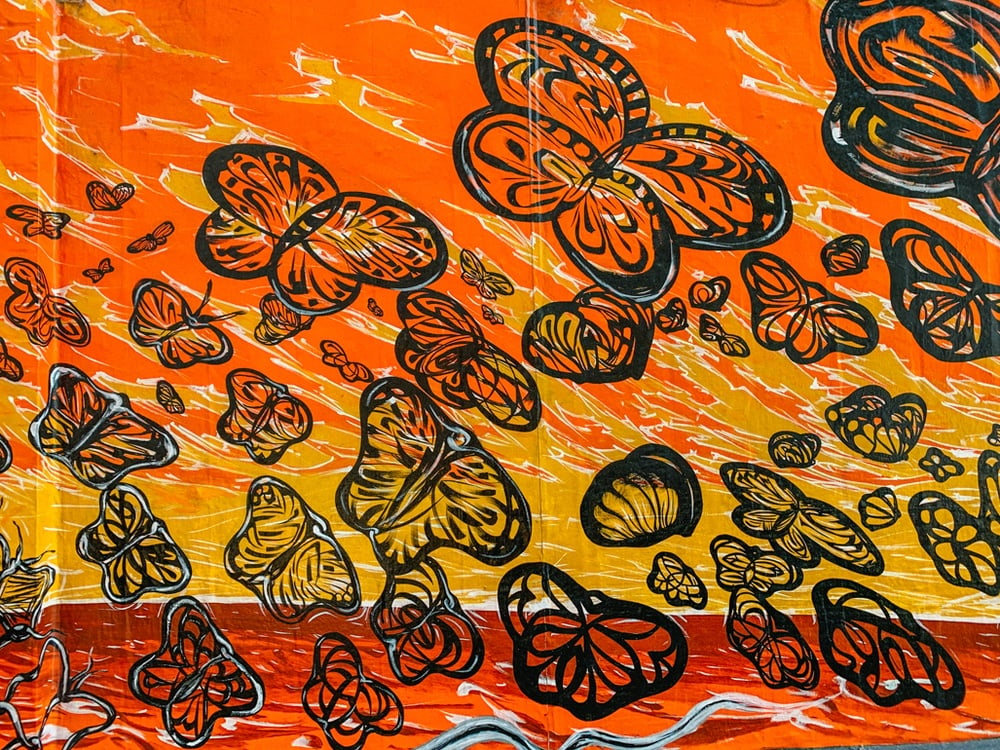 Editors’ Note from Kara: Hey guys! As a blogger of almost 7 years, I’ve gathered some general tips and tricks for taking the best photos of murals for the ‘gram. Kerasa did a wonderful job highlighting particular quirks and challenges on some murals (like ones that are frequently covered by delivery trucks) but here are some more basic tips to help you in Chicago or wherever you go.

If you visit any of these murals, tag me @thewhimsysoul and Kerasa @grafei_kdt on Instagram so we can see!!

I’m a first-generation Greek American and despite being a born and raised San Franciscan, my love for the city is like a seesaw. When I’m not ranting about fatphobia, you can find me photographing nature, eating food and learning about other cultures respectfully. Follow me on Instagram for body image discussions!