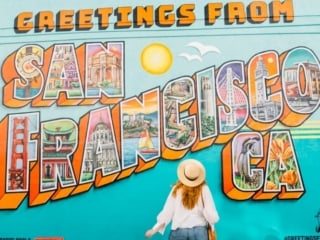 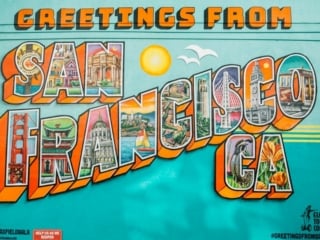 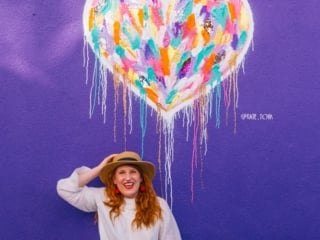 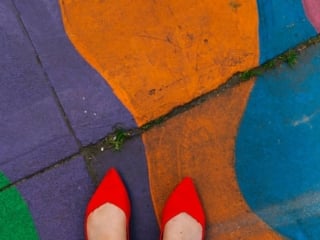 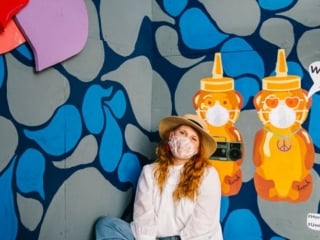 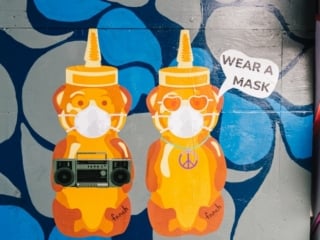 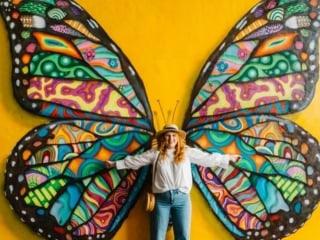 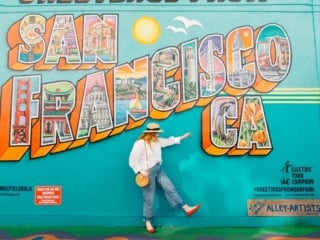 As a local, I was always bummed we didn’t have an awesome Greetings from San Francisco mural as so many other cities do. Finally, in 2019, Maxfield Bala painted us a gorgeous mural in an alley off Fisherman’s Wharf that has turned into the best-hidden street art spot in the city. 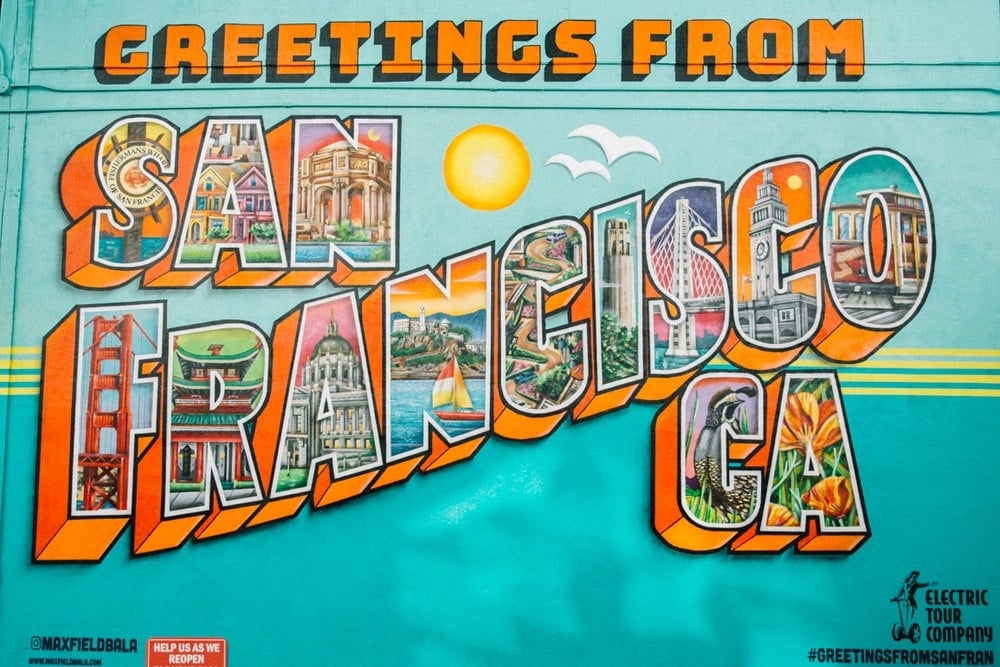 I think she did a fantastic job at a vintage-style postcard mural. The mural features the Golden Gate Bridge, City Hall, Golden Gate Park, Coit Tower, Bay Bridge, Ferry Building, Cable Car, Painted Ladies, Alcatraz, Lombard Street, The Palace of Fine Arts and SO much other fun details from the city.

Where To Find The ‘Greetings From San Francisco’ Mural

Location: Umbrella Alley at 757 Beach Street
Time: Most weekends from 11am- Sunset
Price: Free!
Best time to visit: Later afternoon so the alley is in shade

It’s called Umbrella Alley (though I 100% accidentally called it Umbrella Academy WAY too many times. Anyone loved that show?) Umbrella Alley is located in Fisherman’s Wharf a block down from Ghirardelli Chocolate Company.

Umbrella Alley is free, but has odd hours so it’s not always easy to catch open. (Make sure to check their website before traveling down to make sure they are open that day!)But if you make it, you’ll be rewarded with much more than just the Greetings from San Francisco mural. The ground is painted in this delightful rainbow pattern and there’s a constant rotation of murals here from other artists. 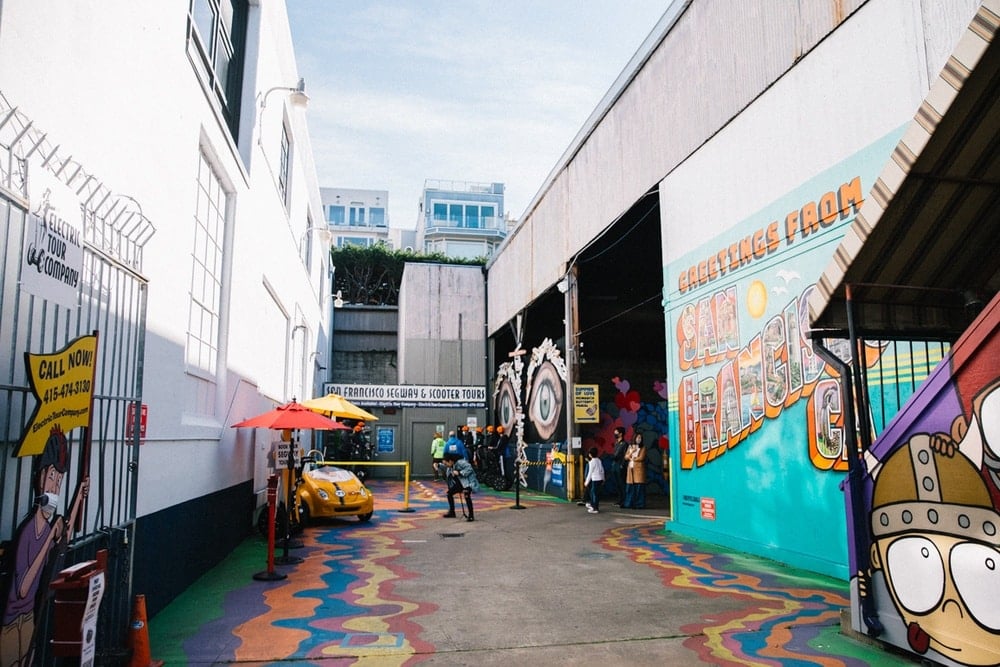 We saw a bleeding rainbow heart by Kate Tova (who has another one of her famous hearts in my own neighborhood, the Inner Sunset). Yonmeister painted a fun cartoon Beach Street Gang mural featuring local style characters and there’s a large eyeball mural by 3Nolam & Brian Huber, though we couldn’t visit that part of the alley as a Segway Tour was kicking off.

Inside the warehouse (yes – it’s not 100% an alley, some works are inside a building off the alley) are a few more pieces. We saw a butterfly mural also painted by Maxfield Bala and a fun “Left My Heart In San Francisco” piece by Brian Huber, too. It was fun timing for me personally since I’ve had that song stuck in my head for DAYS.

And of course, it’s not a proper Bay Area mural alley without a Fnnch honeybear and there’s three of his bears at Umbrella Alley. This guy is a local legend, or maybe hero? Keep your eyes peeled as you wanted around the city. You’ll probably spot tons of honey bears in windows or painted on walls. Some may be themed (like a Pride bear) or plain, but no matter what they also make me smile when I see one.

Umbrella Alley isn’t the only street of mural arts in the city! There’s Clarion Alley over in the Mission District, which is probably my favorite. This alley is a block long and every inch of it is painted. It’s on Valencia and this is open 24/7. Whenever I’m over in the area (usually for meetings) I stop by. My favorite is the rainbow donkeys kissing. I think it’s one of the best murals in San Francisco.

There’s also Balmy Alley over on 24th Street which is similar to Clarion. This is also called Grafitti Alley and It’s been there for years, all covered in local art. And of course, the whole city is covered in murals. I’m sure there are official walking tours you can take, but I recommend just exploring the Mission by foot, starting with Clarion and Balmy. And then head over to Umbrella Alley. All three are some of the best San Francisco photo spots. 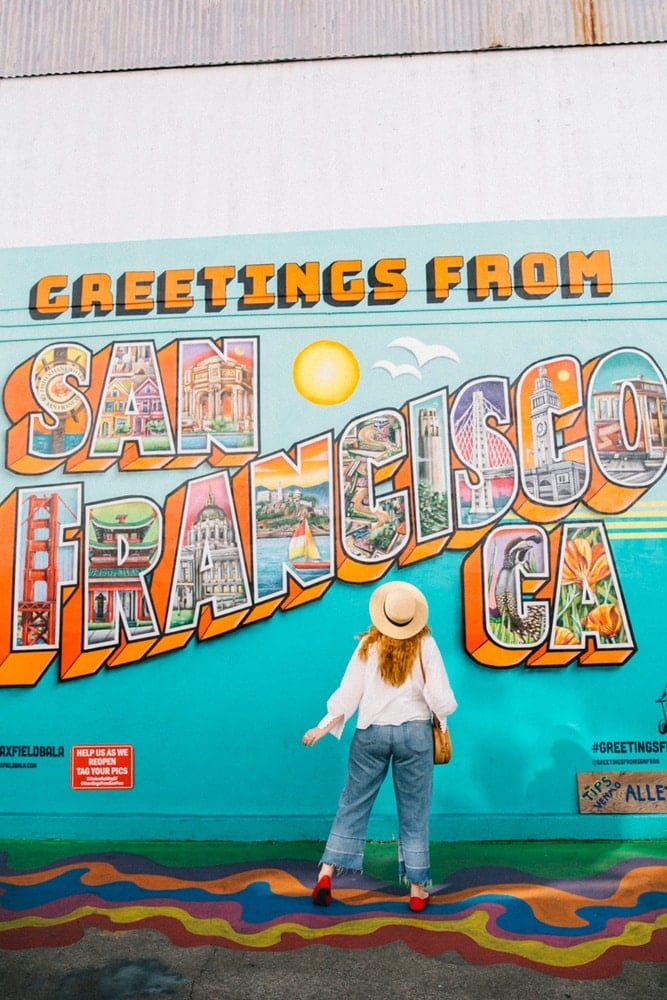 Fun Things To Do In The Fisherman’s Wharf

After you soak up all the fun mural action at Umbrella Alley, you may choose to stick around Fisherman’s Wharf. Here’s the thing: as a local, it’s not my favorite place to hang out. It’s a touristy area and the Wax Museum just isn’t how I like to spend an afternoon.

That being said there are some fun things to do ever here.

1. Ghirardelli Square: I always stop by for a free piece of chocolate!
2. Hyde Pier: it’s historical with cool old ships and informational exhibits
3. Tarantino’s for a clam chowder bread bowl (SO DANG tasty)
4. Musée Mécanique: one of the largest collections of arcade games. It’s SO cool
5. Pier 39: only to look at the cute sea lions sunbathing on the docks. I see them all the time in the water while kayaking but they’re extra cute flopping.
6. In-N-Out: if you haven’t yet tried In-N-Out Burger, the only one in the city is here. 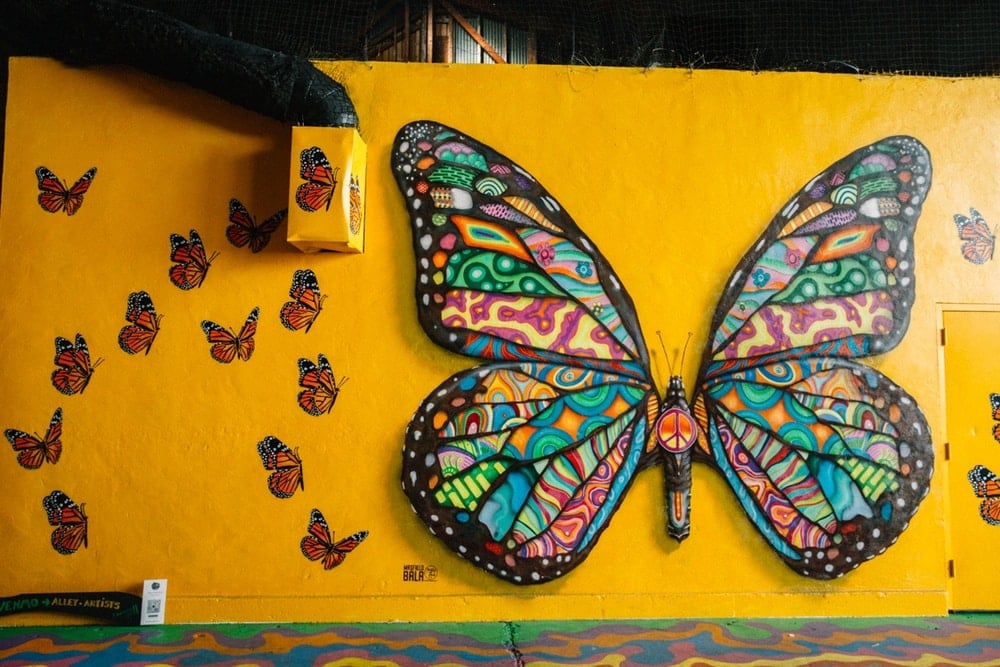 I hope this helps you find the Greetings From San Francisco mural and tons of other fun murals around the city! If you have any questions about Umbrella Alley or San Francisco things to do, drop a comment below. You can also DM me on Instagram @thewhimsysoul and I’ll be happy to help!